10 Interesting facts about Indian currency you probably didn’t know – Indian currency is as historic as the Indian civilization. Currency in the form of punch-marked coins existed even before Christ. Coinage can be traced back to as early as the 6th century BC, in the earliest of civilizations in India. This history of coins and notes is as interesting as it is long.

Here are some interesting facts about Indian currency: 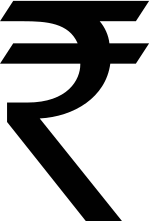 2. Paper money was first issued in the late eighteenth century. Bank of Hindostan, General Bank in Bengal and the Bengal Bank are the first banks to have issued paper currency.

3. Government of India’s first set of notes was the Victoria portrait series. For security reasons, the notes of this series were cut in half; one half was sent by post, and upon confirmation of receipt, the other half was sent. They were replaced by the Underprint series in 1867.

4. The Reserve Bank of India was formally inaugurated in 1935 and was empowered to issue Government of India notes. The first note issued by the RBI was a five rupee note bearing King George VI’s portrait.

5. The one rupee note was the first banknote printed by independent India.

9. 50 paise coins are still in circulation. They are called small coins while the other denominations are known as rupee coins.

10. Mahatma Gandhi (MG) series notes introduced in 1996 are being replaced by the MG series 2005 notes with some additional security features. Pre-2005 banknotes can be exchanged at any bank branch till June 30, 2015.